copenhagen ii: to ride a bike 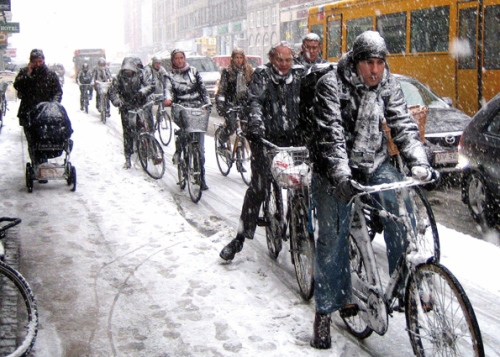 To get on a bike in Copenhagen is to enter into the stream of Denmark. You sit tall on a sturdy machine, equipped with fat tires and fenders, scarf around your face, hat on your head, boots covering your legs. You can ride, as I did, in a skirt or a suit under your coat and be dressed for work when you arrive. As one bike lane gives way to another, you are traffic itself, not peripheral to it. The bikes proceed as deliberately as automobiles. The bike lanes are delineated by concrete infrastructure – curbs or even parking areas between them and the cars.

I got on a bike in Copenhagen because it was my only means of transportation to the Bella Centre, the site of the UN climate talks in December, 2009. Protests around the talks had become violent, shutting down passage by train or taxi, but I had to bring my NGO pass to my colleagues.

The Bella Centre was built outside of the old city, on the flat former fields that support convention centers, hotels, and high rise apartments everywhere. Even design-conscious Scandinavia sports this cheap twentieth-century landscape. Yet here these wastelands -usually the sole province of automobiles – are made accessible and convenient by bike.

Biking there was not an athletic, scenic, or political act. It was utilitarian, a likely means of transportation no matter what the weather, the size of the road, or the density of the traffic. When I entered the bike lane outside my hotel, the streets were wet and cold and I wasn’t sure where I was going exactly. I was immediately swept along in the bike traffic, unable to easily stop or turn around without being run over. We crossed a bridge to the southwest of the city center to a minor highway split down the middle by the train track. The sun, already beginning to set at two p.m., was a vague smear of light over fields and small neighborhoods.

We crossed over a major highway. A windmill turned and farther out on the horizon stood smokestacks. Snowflakes flew. As I neared the Bella Center, the auto traffic stood still under beating helicopters. Giant sculptures of three Masaai rose out of the yellow grass as some sort of display for the talks. They had the emaciated, haunted look of the skeleton sculptures that protest groups had put near the doors of the convention center in somebody’s idea of inspiration.

At a UN checkpoint I saw how much I’d managed to assimilate just by biking. One of the officers approached, smiling, and addressed me enthusiastically. Maybe he was remarking on the craziness all around; I had no idea. I didn’t even know how to say “I don’t speak Danish” in Danish. I stopped, shrugged my shoulders, and laughed, pulling the pass hanging around my neck out from under my scarf. His eyes widened in surprise at a foreigner on a bike.

The people who had come from all over the world to negotiate reducing greenhouse gas emissions were stuck in traffic. Those who came to protest were behaving such that helicopters and SUVs had to be brought in and run all day. Seemingly unaware of it, they presented the world that is: noisy, clashing, exhausting of resources, inefficient. The world that causes climate change.

I continued on past the Convention Center to the Radisson, where NGOs and negotiators had decamped while waiting for their passes. I wheeled the bike up a narrow ramp etched in the concrete beside the front steps for just that purpose, parked it with the many others in the rack, took off my coat to reveal my work outfit, and went inside.

What I had just experienced was part of the vision and the infrastructure of the carbon-light world. The people around me huddled with their Blackberries while the protesters outside delighted in made-for-TV clashes with the police. But getting on a bike, within a city- and nation-wide infrastructure that made this a mainstream and convenient option, was the least act of protest and the most visionary. It was an example of structure and change we might implement to save ourselves. Nobody mentioned that. 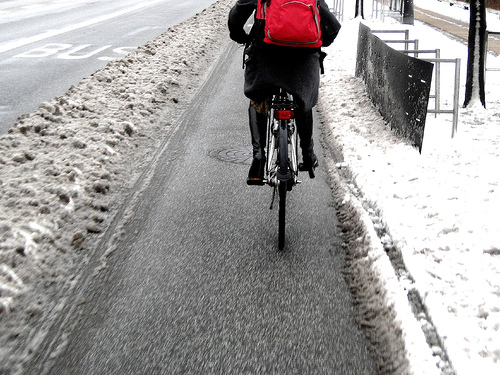