by The Design of Things 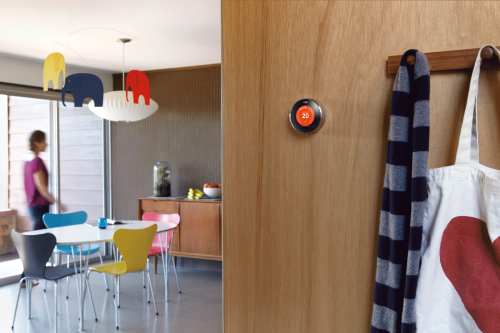 Last year, Google decided to expand from being Encyclopedia Britannica and Rand McNally (with advertising) to becoming a little more Jeeves in acquiring Nest, a company that makes “smart” thermostats and smoke alarms. Whether Jeeves is a spy – will he tell Google when you’re not home? – remains to be seen. What caught people’s attention was the fact that Nest has made all its money on two lowly products because of the clever things they’ve done with them.

Nest made these utilitarian members of the household more beautiful and far more useful. As we in the North have been hitting one of our two most energy-intensive times of the year, I’ve become interested in the thermostat, designed to reduce energy use by addressing human flaws and appealing to human sensibilities.

Modern thermostats are already programmable but, according to Nest, only a small percentage of households program them or remember to adjust them, wasting 20% of home energy. We don’t have any immediate incentives to save energy and little awareness of our actual energy use. The person who pays the bills gets this information retroactively and in the aggregate – no tracking of our usage according to our household habits. (When the bills are high he or she might be the one following kids and spouse around the house turning off lights, turning down the thermostat during heating season, or asking said children to put on some socks, for crying out loud.)

So I like the idea of Nest – the thermostat will even program itself after a week or so of adjustments from the family. Its attractive simplicity engages us, including the fact that the whole thing is a dial you spin to change the temperature. (I like dials.) It can connect to the wireless network to adjust according to weather and barometric reports, or to be directed remotely from our smart phones, but doesn’t have to be on wireless to work. It has an “away” mode that reduces energy use when we’re gone.

But it’s expensive – still $250. I entered my zip code for rebate information and found I can get $25 back from my electric company, not enough to make a real dent in the price. So how could a family make it worth it?

Using a competitive aspect of the design could help. Nest tells you when you’re saving energy with a leaf icon, but you don’t get the leaf at a predetermined temperature. You get it according to your household’s particular energy use. And Nest adjusts the terms of getting the leaf over time, encouraging you to do better. This feature lends the opportunity for real engagement and participation from the family, from kids especially. If Nest is purchased as a family project, and its use by everyone is encouraged, it can engage kids’ curiosity and capacity for absorbing information and learning how to analyze it – particularly if there are family rewards for saved energy.

This blog on Nest’s website describes the details of earning a Leaf. It reminds me of the quarterly report I now get from our electric company that turns a utility bill into a competition. When I’m only doing “good” and not “great” compared to my neighbors, it actually kind of annoys and motivates me, even though I know that’s what they’re trying to do. (I even got psyched when I opened it to “great” – but that only happened once.) But I don’t have any other real time feedback. Kids and adults can put an app for Nest on their phones, track the usage according to family activity, and track the leaf – especially if there’s a pizza or a night out in the results.

Filed Under: the design of Commerce
Tags: Energy use : family : home : Nest

3 Comments to “Nesting with Google”